Signs That A Horrific Global Food Crisis Is Coming...Prepare by Food Dehydration

In case you haven't noticed, the world is on the verge of a horrific global food crisis.  At some point, this crisis will affect you and your family.  It may not be today, and it may not be tomorrow, but it is going to happen.  Crazy weather and horrifying natural disasters have played havoc with agricultural production in many areas of the globe over the past couple of years.  Meanwhile, the price of oil has begun to skyrocket.  The entire global economy is predicated on the ability to use massive amounts of inexpensive oil to cheaply produce food and other goods and transport them over vast distances.  Without cheap oil the whole game changes.  Topsoil is being depleted at a staggering rate and key aquifers all over the world are being drained at an alarming pace.  Global food prices are already at an all-time high and they continue to move up aggressively.  So what is going to happen to our world when hundreds of millions more people cannot afford to feed themselves?  Read More 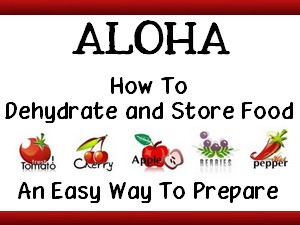 Aloha from Maui...For the first time in my life I have begun to store food. Dehydration is the method I have chosen because of the ease and simplicity of the process.

To start I have made a solar dryer box out of cardboard similar to this one. 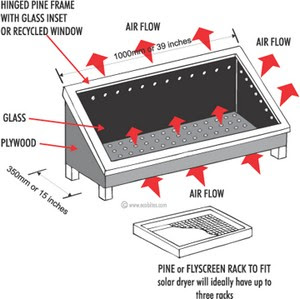 Maui's sunshine and warm weather should make dehydration a year round possibility. If sun drying is not satisfying I will go the way of a Food Dehyrator such as the one shown in the following videos. These short 5 part videos are extremly helpful in demonstrating the process from beginning to end.

Posted by Donna Sorensen/jas2maui at 11:36 PM